3 reasons why you should learn how to use PowerShell

If your job is remotely connected to corporate information technology (IT), then you have likely heard of the term “PowerShell.” Available on Microsoft Windows, PowerShell is a Windows command-line shell designed especially for system administrators. While it may look similar to the Command Prompt app in Windows, PowerShell isn’t just a way to type legacy Microsoft DOS commands inside Windows’ graphic user interface (GUI). PowerShell is a scalable way for corporate IT managers to automate business-critical tasks on every Windows PC across a wide area network. That’s why learning PowerShell commands can give you skills crucial for managing IT at any business.

The barrier of entry to learning PowerShell is relatively low because of its near ubiquity. If your computer is running Windows 10, then you can type “PowerShell” in the search box to get instant access to the Windows PowerShell app: 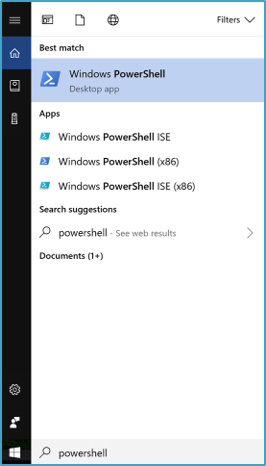 PowerShell includes an interactive prompt for typing commands. Although most people interact with their devices using a GUI, those same devices also offer a text-based interface for issuing commands called a “command line interface” (CLI).

PowerShell is the built-in CLI for Microsoft Windows used by IT administrators and help desk workers to:

Windows PowerShell introduces the concept of a cmdlet (pronounced “command-let”), a simple, single-function command-line tool built into the shell. You can use each cmdlet separately, but their power is realized when you use these simple tools in combination to perform complex tasks.

Windows PowerShell includes more than one hundred basic core cmdlets, and you can write your own cmdlets and share them with other users. Knowing how to design cmdlets and perform PowerShell scripting are in-demand skills for companies large and small throughout North America and Europe. A recent search for “PowerShell jobs” on Dice.com (a tech recruiting website targeting jobs that pay six-figure salaries) returned almost 2,000 open positions in just 15 locations across the United States.

We know installing operating system updates on a PC takes a few clicks. However, installing those updates on just a dozen laptops and the odd desktop PC in a small office can be time consuming. Imagine how much time required to update 563 different PCs in a couple of locations—without affecting the overall productivity of your workforce.

Smart IT admins use PowerShell to script a cmdlet for a task they have to perform more than a couple of times. Anything you can do with a few mouse clicks in the GUI can be done more quickly in PowerShell.

Like many CLIs, PowerShell provides access to the file system on the computer. In addition, PowerShell providers enable you to access hard-to-access data and information. For example, IT admins can use PowerShell to easily get into secure data stores such as the Windows Registry and the digital signature certificates.

This is important because unlike most CLIs, PowerShell is built on top of the Microsoft .NET Framework. It’s a unique feature that enables IT professionals to automate and remotely perform special tasks on any Windows PC on the corporate network. Best of all, PowerShell easily provides IT admins with deep visibility and control over all of those network resources just by typing a line of command-line code.

PowerShell is also an important part of managing corporate-wide deployments of Microsoft Office 365. There are many useful administration commands in PowerShell that are unavailable in the Office 365 Administration web portal. For example, the default option in Office 365 for Business is either for all users to change passwords on a regular basis or for nobody to ever change their passwords. Amaxra uses PowerShell to enable individual Office 365 users in our organization using two-factor authentication to skip changing passwords on a regular basis. Without PowerShell, we wouldn’t have the ability to change Office 365’s default password options.

Why PowerShell Skills Are Popular

The commonality between the three reasons why PowerShell skills are in demand is obvious: Scripting cmdlets in PowerShell is like programming. Because every organization relies on IT for productivity, PowerShell scripting is a sought-after ability. At Amaxra, we often have job openings that require PowerShell skills listed on our Featured Opportunities page.

Do you have PowerShell skills and want to deploy them as a consultant with Amaxra? Connect with us and we’ll help you find your next project!

A Guide on Dynamics 365 Business Central November 17, 2022
What Is a PBX System and Why Businesses Should Move Away From It November 15, 2022
A Guide to Dynamics 365 Field Service [Benefits & Key Capabilities] November 10, 2022
3 Key Benefits of Microsoft Teams for Business November 8, 2022
A Guide to Business Continuity Solutions [Integrations & Top Software] November 3, 2022
8 Skills Needed To Be A Successful Tech Lead December 3, 2019
The Ultimate Guide to Windows Hello for Business July 19, 2022
Office 365 E3 vs E5 - Main Differences & Licensing Tips September 6, 2022
3 easy steps to get real-time online data into your Excel spreadsheets October 16, 2018
Key differences between Microsoft OneNote apps and preparing for a future unified app September 23, 2021